If ever a scoreline doesn’t do justice to how a game played out it was in this National Cup tie. Our 15A’s played very well against an equally good Ballyhar side. In football, however, it’s the team that takes their chances that wins the game and so we exited the National Cup for this year.

The boys gave 100% for 80 minutes and all 16 players can be very proud of their efforts. 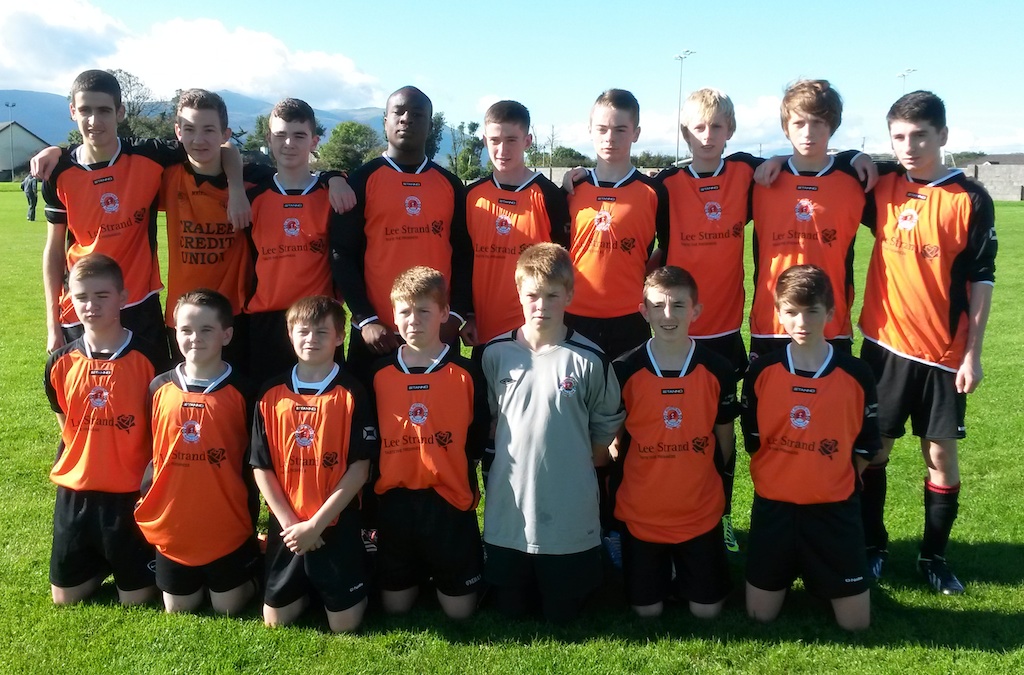 Looking for a solid start is one thing, but unfortunately, we fell behind after only 8 minutes. A dangerous attack down our left had been expertly stopped by Mark. However, the resulting corner was a real bullet to the near post where a Ballyhar head got a flick on which ended up in the top corner of our net.

Despite the setback, our boys stepped up and created some good openings through lovely 1-2’s and good football on a perfect pitch. Dylan and Conor combined well in the 15th minute and only some very good goalkeeping prevented us from equalising.

For the next 15 minutes or so it was nip and tuck with little being created by either side. That was until the 32nd minute when quick thinking from Sean and Alan taking a free kick short caught Ballyhar napping and an equaliser was only denied by strong Ballyhar defending.

Shortly afterwards, Jacob came on for Tom who was carrying a knock at that stage despite battling bravely against it. Jacob’s strength and tenacity down the left allowed him to win the ball and free Owen M who was then promptly clattered from behind. Alan took the free kick from 25 yards out and his curler looked destined for the top corner until somehow (and I still don’t know how!) their keeper got his fingertips to the ball and it cannoned off the crossbar and away to safety leaving it 1-0 to the away side at the break.

The second half started in similar fashion to the first half with Ballyhar grabbing an early goal. A hopeful ball into our box wasn’t dealt with and lady luck dropped the ball on the toe of their striker who tapped the ball into an empty net.

Eoin L came on for Mark in the 51st minute. Mark had played very well against a really good Ballyhar left winger and Eoin L found out exactly how good over the last 30 minutes. Despite this, Eoin combined very well with Gearoid on occasion.

Indeed after some neat work between the two, Gearoid played in a lovely ball to Kiwi who had beaten the offside trap and looked to have finished expertly only for the spin on the ball to take it inches wide of the left post.

At this point, Alan and Owen M were starting to rule the midfield as we searched for a lifeline. We had to take risks to try and get back into the game and it was our risk taking on another one of our attacks that led to us conceding on the counter attack in the 55th minute.

Joseph came on for Conor, Dean for Kiwi and Jose for Dylan and the introduction of these players gave us a real lift on the pitch. Joseph caused real problems for their back 4 and Dean and Jose added some real composure on the ball allowing us to create some excellent chances.

We finally took one on the 75th minute when Jacob played a superb diagonal ball to Joseph who cheekily lobbed the advancing keeper making it 3-1 entering the last 5 minutes.

Our hopes for a comeback were dashed however, when Ballyhar again scored on the counter attack. Despite this, some great play from keeper David, Sean and Cian at the back and with Alan still working so hard in midfield we continued to create good chances deep into injury time.

The lads gave 100% on the day and should look forward with optimism to what’s ahead.

PrevPrevious(U11) Group 1; Park A 2-1 Listowel Celtic A
Next(U17) Gallery of 3-0 win over Moneypoint in FAI CupNext

Got a Question for us?